In September 2000 the second Intifada, the Palestinian uprising against Israeli occupation, began.

The revolt was triggered by the collapse of Camp David Peace Talks between the Israeli Prime Minister Ehud Barak and PLO Chairman Yasser Arafat and the controversial walk by Ariel Sharon on the Temple Mount in Jerusalem. These images document the period from soon after the uprising until 2002. The progression of the project went from covering the violence to doing more street portraits, street photography and documenting daily life among the Palestinians.

In the context of the Palestinian-Israeli conflict the daily lives of the Palestinians are often forgotten. Extensive travel throughout the West Bank and the Gaza Strip helped to address this imbalance in the daily news cycle by creating a record of their every day lives. 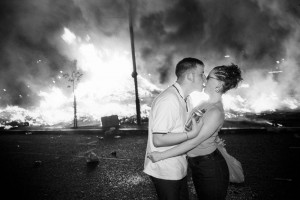